The third quarter of 2020 ended with historical results for Fras-le, which recorded net revenue of R$ 453.6 million, 36% higher than the same period of the previous year, and gross revenue of R$ 647 million, an increase of 35% compared to the third quarter of 2019. The comparison of the two periods also shows the growth in gross profit, which reached R$ 150.6 million, 80% higher than the third quarter of 2019. EBITDA recorded R$ 94.2 million, an increase of 118% compared to the same period last year. The performance achieved this quarter is the best of the last ten years of the company, which has been on the market for almost seven decades.

Fras-le's historical performance results of the strategic implementation for increasing competitiveness to the business. It was also possible due to focus on the expansion of revenues and product offering, through acquisitions, and by the adjustments in processes that the company has been going through since the end of 2018, which included a series of actions, such as investment in technology, readjustment of lines, process changes for productivity gain and cost reductions.

"These movements were fundamental to the results of this quarter and contributed to the strengthening of our operations in the domestic and foreign markets. Even with the challenges of the Covid-19 pandemic, we were able to evolve in revenue and profitability indicators, paying attention to the health care and safety of our employees, showing that the company is prepared for different scenarios", stresses The CEO of Fras-le, Sergio L. Carvalho.

The positive performance of the company in the third quarter of 2020 was also due to the auto parts market itself, meaning the change in consumer habits, which began to prioritize private transportation, and consequently increased the need for parts for the vehicles.

Additionally, the improvement of the foreign market also influenced the results of the third quarter, mainly due to the gradual opening of borders, customer’s inventory recomposition and the favorable exchange rate. According to the Director of Investor Relations, Hemerson de Souza, the company continues with moderate optimism. "We are preparing, because we know that we will have some points of attention for the coming months, such as inflation that has been observed in indicators such as IGP-M and the difficulty in acquiring raw materials," he said.

Nakata
In the third quarter of 2020, Fras-le also completed the largest acquisition in its history, the purchase of the company Nakata Automotive. The acquisition reinforces the company's resilient positioning in the Brazilian aftermarket, maintaining the balance with other markets, and expands the already diversified product portfolio, mainly adding the suspension and management systems.

The union between the two companies is an important movement for the auto parts aftermarket, as it combines the automotive replacement services experience of the two companies and expands the range of products assembled under the same group, with the combination of Nakata's portfolio with the mix of the Fras-le, Controil, Fremax and Lonaflex brands.

Investments
In the third quarter, the company's investments totaled R$ 11.1 million. Of this amount, R$ 2.3 million was allocated to a new dynamic testing area (VDA - vehicle dynamic area), located in the CTR - Randon Technology Center, in Caxias do Sul. With 53,000 square meters, the space was developed for testing and homologation of stability control systems. The structure also has the largest low friction track in Latin America and special tracks for noise analysis and tire performance. 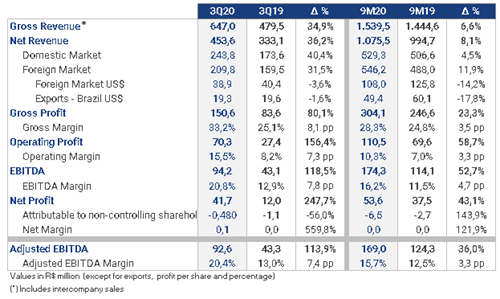