Consolidating its business as a complete hub for auto parts solution, Fras-le achieved a new record result with positive performance. In the third quarter of 2022, the company recorded R$ 823.9 million in consolidated net revenue, a 25% increase compared to the same period last year and 5% compared to the previous quarter of this year. EBITDA reached R$ 137.9 million in the third quarter, an increase of 36%, while ebitda margin was 16.7%. Recovery of the OEMs market in the quarterly comparison and the heated demand in the aftermarket associated with price recomposition in some product lines are some of the factors for the good numbers of the period.

Revenue in the foreign market, which includes exports from Brazil and the performance of operations in other countries, totaled R$ 330.3 million in the quarter, an increase of 26.2% compared to the same period last year. The high demand, mainly for brake discs, and the increase of friction material in stocks in the North American market contributed to the results. The Company has also expanded its market share in the Argentine market due to import restrictions faced by competitors.

"These figures prove the assertiveness of our strategy with resilience to face market fluctuations, the continuous leadership of our brands in the Brazilian aftermarket as well as the portfolio expansion for the foreign market", highlights Hemerson de Souza, Fras-le’s Investor Relations Director.

Among the process optimization initiatives and synergies gains, the quarter was marked by the conclusion of the integrated logistics’ project for the aftermarket in the Distribution Center in Extrema (MG) - Brazil. The complex concentrates the Brazilian national distribution of products of Fras-le, Fremax, Controil and Nakata’s brands to the Southeast, Midwest, Northeast and North regions of the country. Improving the customer experience with the delivery of goods with more economy, agility, and efficiency.

In 2022, Fras-le recorded R$ 2.3 billion in revenue, an increase of approximately 22% over the first nine months of 2021. "Records, synergies and results that demonstrate our robustness as a hub for the automotive market. Building today the future we want for our company, keeping the goals of continue improvements and expansions", says The President and CEO of Fras-le, Sérgio L. Carvalho. 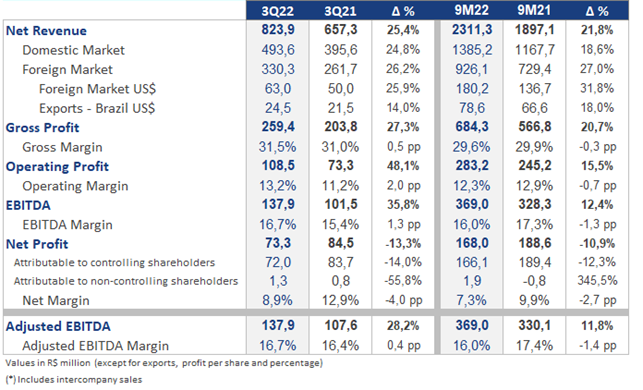