The company's record performance, which has been repeated in the last two quarters, is the result of strategies and actions aimed at increasing the competitiveness of the business, initiated in the last three years, of acquisitions aimed at expanding the supply of products and external factors that directly impact on the company's operations, such as the favorable exchange rate and the positive performance of some sectors , such as the spare one.

"Fras-le's good revenue and profitability indicators were reinforced by Nakata, the company's recent acquisition, which increased consolidated results. In addition, our management team and our teams, attentive to market movements and the needs of our customers, were fundamental to the growth presented by the company in the period", highlights the CEO of Fras-le, Sergio L. Carvalho.

In addition, Fras-le maintained its trajectory of rise of results driven By diversification, in terms of geographic performance, products and segments served. Proof of this is that sales products accounted for more than 50% of the company's net revenue in the first quarter of 2021, a fact unheard of in the company's history.

“This result is aligned with the diversification strategy printed by the company in recent years, mainly through acquisitions, which prepared us to act more resiliently to market movements. Along these lines, we are also aware of the current challenges of the sector, such as the scarcity of raw materials and inflation, which make us see the coming months with caution", stresses the Director of Investor Relations, Hemerson de Souza.

Investments
In the first quarter of the year, Fras-le's investments totaled R$ 21.3 million, mainly focused on plant automation. In the controlled units, the most significant investments were in Nakata, which received R$ 6.1 million for the transfer and adjustments of the new shock absorber plant located in Extrema, Minas Gerais, and an investment of R$ 4.1 million in Controil, referring to the expansion of the production capacity of brake master cylinders. 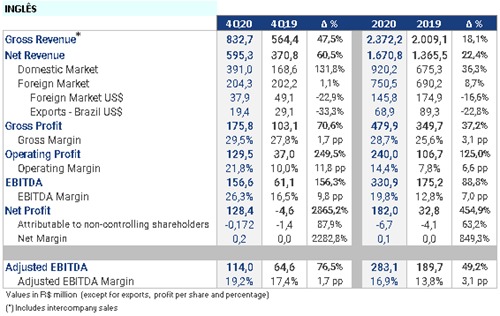 Note: Text original in Portuguese, translation made by RPA.