The performance of the first quarter of 2020 resulted in positive numbers for Fras-le. The company recorded net revenue of R$ 341.8 million, an increase of 6% over the first quarter of 2019, and total gross revenue of R$ 488.3 million, an increase of 3% compared to the same period last year. Also in the first three months of the year, the company achieved 18% growth in gross profit, totaling R$ 88.7 million, and reached EBITDA of R$ 38.1 million, 31% higher than the same quarter a year earlier.

Throughout the first quarter, Fras-le maintained its trajectory of rise in results, mainly driven by global performance, which allows the use of opportunities in more favorable markets. According to Fras-le CEO Sergio Carvalho, the company sells to more than 100 countries and has more than half of the sales made out of Brazil. "The heterogeneous revenue profile is one of the company's strengths and this was reflected in the first quarter of the year. Our revenues have an expressive volume in the aftermarket, including maintenance of fleets of vehicles in circulation, a highly pulverized segment", stresses Carvalho.

In addition, the diversification of the product mix also contributed to the improvement of the performance of the indicators in the first months of the year. "It is visible the improvement of the automation processes of our factories, which has ensured us even more efficiency. This result reinforces the assertiveness of the adjustments that Fras-le made throughout 2019 and that are already being reflected at the beginning of the year", highlights the company's CEO.

The covid-19's reflexes were felt by the company in the second half of March, impacting part of the sales performance in the month and at the end of the quarter. Non-recurring events, of a non-cash nature, also influenced the company's net result, which generated a loss of R$ 1.2 million in the period. Discounting the amount allocated to non-controlling partners, the result is a profit of R$ 3.7 million.

Covid-19
Also in the first quarter, at the first signs of Covid-19, Fras-le adopted several measures to protect the health of its employees and family members, to ensure the continuity of operations and to contribute to the functioning of the local and global economy. According to Carvalho, the pandemic did not have a significant impact in the period, but sales have already been partially affected, mainly due to the collective vacation adopted by the company, still in March. "The learning we had with Fras-le's unit in China contributed to us anticipating decision-making in Brazil and other countries. In addition, we quickly structured a Crisis Committee, with the objective of discussing the best health and safety practices to be adopted, as well as actions to minimize the economic impacts on the company", he reinforces.

Among the actions implemented by Fras-le are collective and individual vacations, flexibility of work journey, home office, as well as prevention initiatives such as measuring the temperature of employees in the accesses to the company, use of sprayers and other resources of hygiene and assembly of screening stations in the units to meet and clarify doubts.

The company is also engaged in supporting the community and, for this, has already made donation of PPE to the hospital network of Caxias do Sul and inputs for the production of respirators and alcohol gel, signed a partnership in manufacture of facial protection masks, for health and safety professionals working to combat Coronavirus, distributed 50,000 bottles of gel alcohol to truckers on brazilian roads and made a donation for buying respirators.

Investments
In the first quarter of 2020, investments totaled R$ 13.7 million, the main ones: R$ 4.2 million at fras-le's unit in Caxias do Sul (RS), intended for machinery, equipment, tools and molds and safety adjustments related to NR-12 standard. At Fremax, investment values totaled R$ 5.4 million, most of which were used in the acquisition of new machines and equipment to expand the foundry's capacity. In relation to the investments of the other subsidiaries, in the amount of R$ 4.1 million, the main allocations are related to the operations of the United States, India and Uruguay, as well as to the acquisition of machinery and equipment. 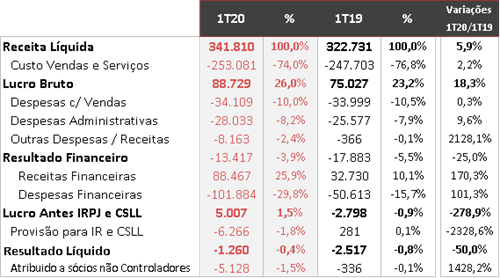 read more
Fras-le achieves record net revenue of R$ 1.5 billion in the first half of 2022

Indicator is 20% higher than the same period last year; resilience and diversification of product and solution offering underpin the strategy
of the company